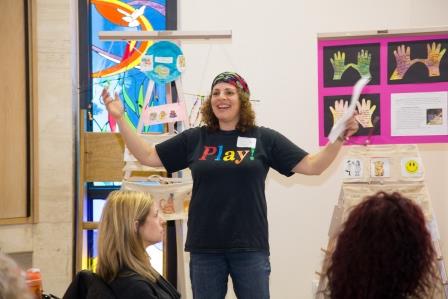 Director of Parent and Child Education, Pressman Academy and Inaugural Fellow, The First 36 Project of the Simms/Mann Institute, BJE and the Jewish Federation

My job involves educating both children and parents. I work with parents individually and in groups, arrange adult education programming, and work with the director of the Early Childhood Center on curriculum and educator enrichment as well. This year I have had the delightful privilege of being included in an inaugural cohort of Fellows, as part of The First 36 Project. As a fellow I have learned about some of the core developmental processes in children 0 to 36 months and how the parent-child bond is so crucial to those processes. After studying cutting edge research on areas such as attachment, temperament and communication, through a variety of enriching, educational activities and seminars led by neuroscientists, psychologists and child development specialists, I, along with the other Fellows, have worked on how to best present this information to parents. One of the things I have enjoyed the most in the process has been finding wisdom in our traditional, Jewish texts that speak to these topics, and integrating those Jewish teachings into the discussions.

I meet children starting in their first year of life, and I love when I have the chance to see them continuing on their Jewish paths. My youngest child is a freshman at Shalhevet, and I knew many of his classmates when they were two year old students at Pressman, so it is a joy to see them becoming mensches.

I had a child in my class whose older sibling had also been my student. As holidays approached, this child would excitedly say things like, “Oh, we get to make the tree birthday cake,” for Tu B’Shevat. I realized that many of the rituals and celebrations I’d been teaching had become part of that family’s rituals and how they told their Jewish story. When you’re in the “trenches” in the classroom, you don’t always get to see the longer view, so it is incredibly rewarding to see the rituals and traditions I’ve taught play out for individual families, as their children grow into emotionally intelligent mensches. That really is the point of everything we’re doing.